The heady romance of Heywood Gardens

Described to me modestly by locals living in the Irish midlands as a "nice afternoon walk", Heywood Gardens turned out to be a surprising theatrical and romantic 50 acre garden and parkland, set behind medieval stone walls with bright blue doors on the gate lodge entry way, where the the iconic obelisk still sits inside the gates listing the furlongs to Dublin.

Heywood Gardens is situated near the towns of Abbeyleix in the midlands of Ireland in Country Laois, and is a garden that began its life as a parkland designed in the 1700's with additional planning and design completed by 1912. Both the parkland and Mediterranean-style garden compliment each other greatly and is worth more than just a quick peek for visitors.

Walking up through the gate lodge from the car park we discovered the unique elements of the parkland, complete with grotto, then walked up the hillside path lined with jagged stone walls to discover the follies. As it was the very last week of Summer, the lush green growth over the walls added to the theatre and our children loved discovering what was between all the buildings and walls and looking out the windows into other parts of the garden.

We found the Orangery as we headed up, fantastically Gothic in style, but modern with heated pipes on the inside, this is where the family and guests would enjoy tea in comfort and warmth while the oranges and other tropical fruits grew inside. I’m sure many weekends spent here were indulgent.

After a grand tour of Europe, Frederick Trench designed the parkland, to create a sham castle and Gothic style follies, in an attempt to re-create the things he had seen abroad. He wanted to create the “perfect” landscape, and did so by moving hills, digging lakes, planting to specifically planned forest design and keeping follies within view of the house. All of this work to make the landscape look “natural”! It was hailed as a success by visitors and described as one of the most romantic of its day. 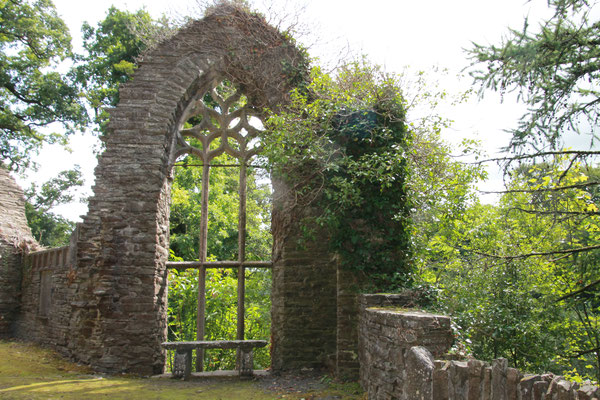 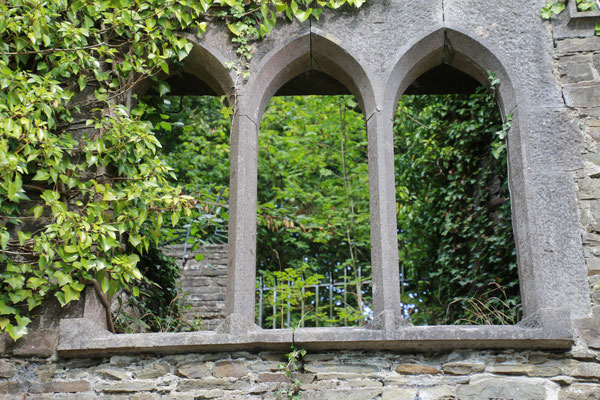 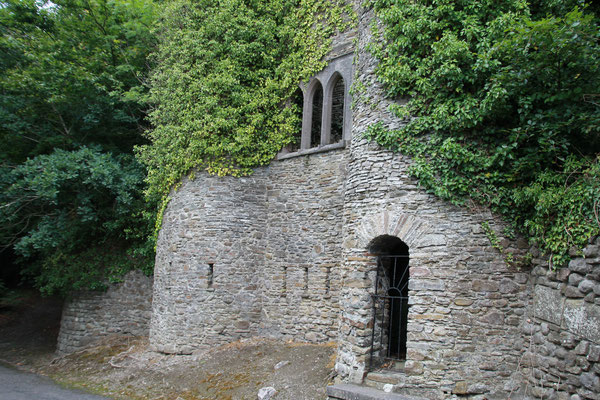 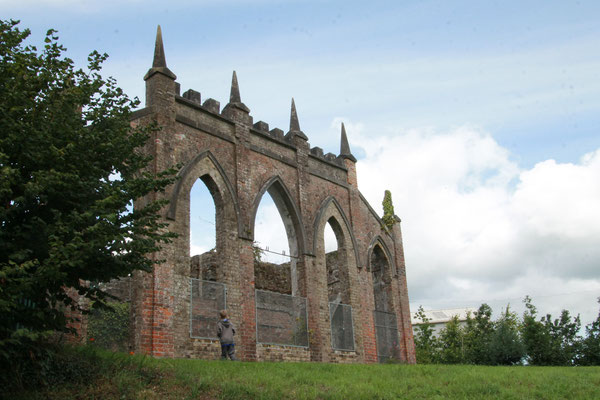 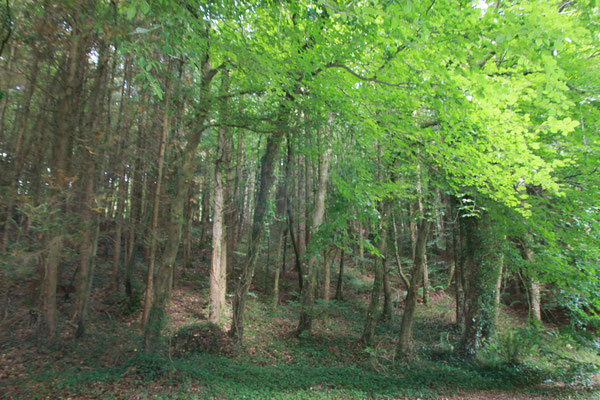 Positioned at the very top is where the newer design of the garden takes over and its more structured. Walking down a path lined with pleached limes, this garden was designed to show off the best of the horticulture trends that were popular of the time. The garden rooms all have their own unique character and right in the middle is the sunken flower garden, with a completely perfectly shaped oval pool in the middle, finished in style with an unusual turtle fountain, its head spraying water upwards into the pool.

There is a red-roofed loggia and cut stone surrounding walls next to lawn where the house would have stood. I’ve never stood in a place outside of Italy that felt more Italian. It was a bright sunny day and the perhaps it was the height of summer that added to the ambience, the climbing plants were enjoying the sunshine as every bit as much as we were. While some describe the absence of the house as distracting, I actually loved the lawn and its breathtaking view out into the landscape, I spent as much time sitting on the lawn as I did walking around the garden.  It had a calm and peaceful energy as its location is right at the top tier of the entire garden. There is an openness and peacefulness about the lawn as you can look over to the hills or behind back into the formal gardens. 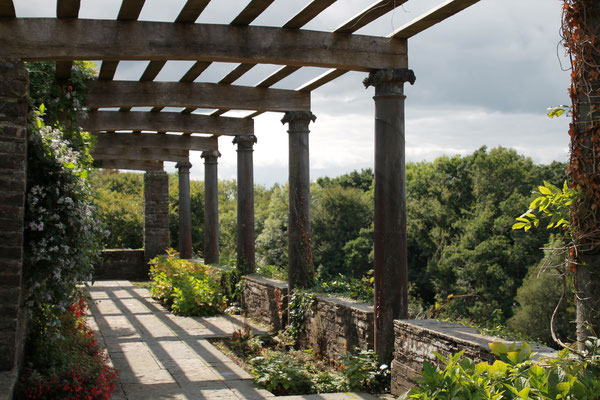 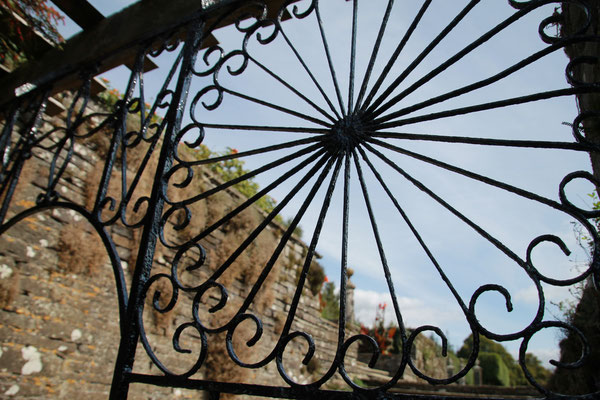 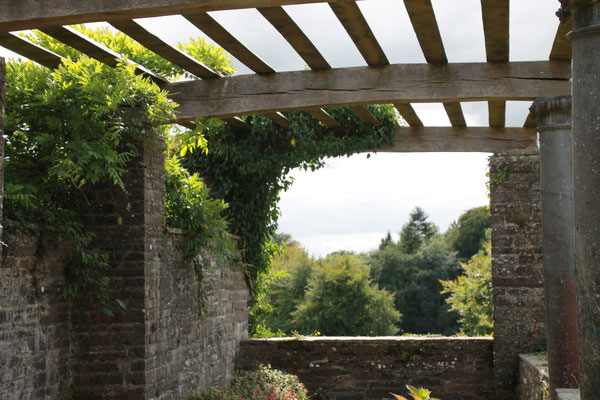 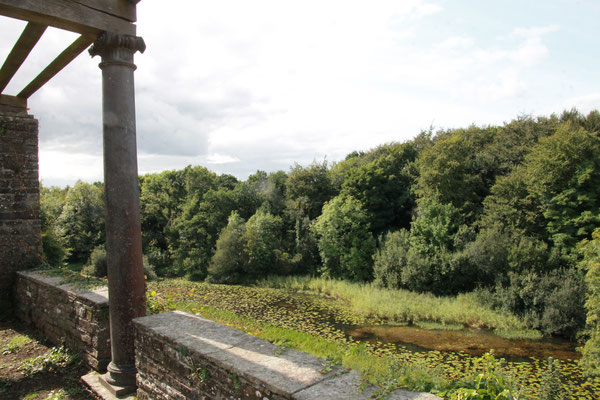 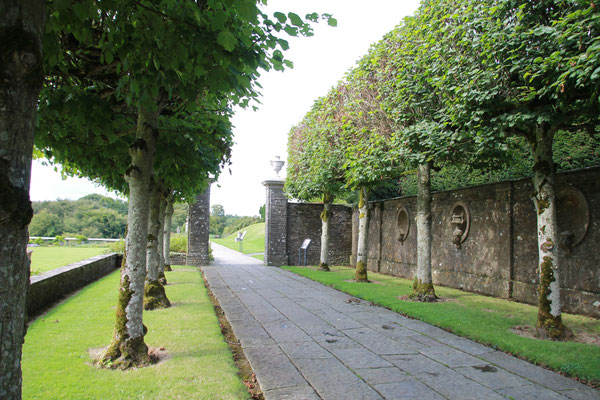 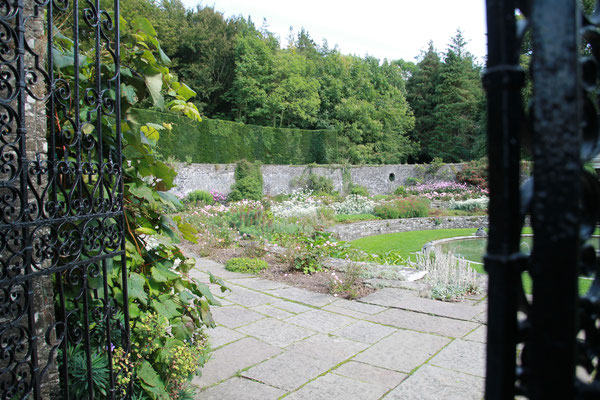 Despite the newer additions to the garden being designed by Sir Edwin Lutyens, its thought that the garden is not so well known as its location in the “land locked” midlands in the 18th and 19th century was not popular to overseas visitors to Ireland, more sightseers tended to head to the coastlines of the country at that time.

But wow have they missed out! I myself have been guilty of choosing other places to visit over it, as my curiosity had never been peeked by local conversations. From what I had heard it was a nice place to have an afternoon walk, described as a small garden to me, but in fact I was surprised to find that the parklands and gardens cover over 50 acres and due to recent restoration works feature beautiful statues and garden objects, a unique yew walk and a walled flower garden, planted with roses and spectacular Salvias, Dahlias and other Autumn goodies. Gardeners were tending to these gorgeous plants the day we were there. 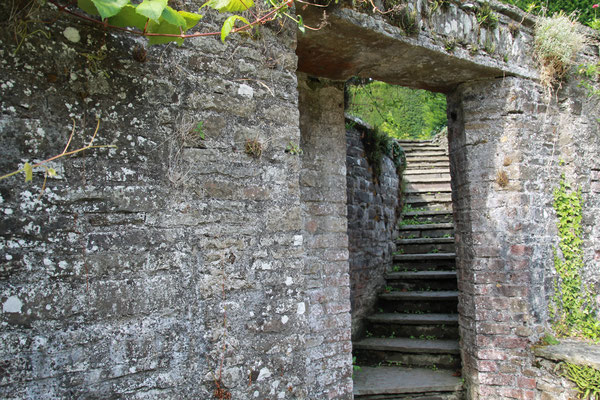 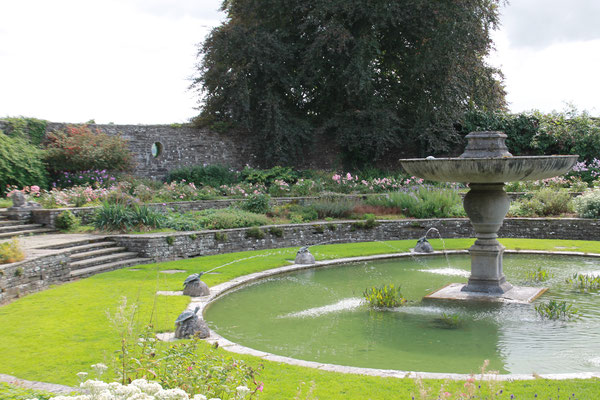 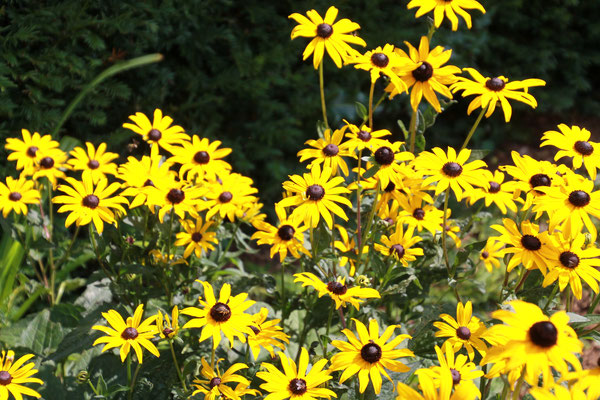 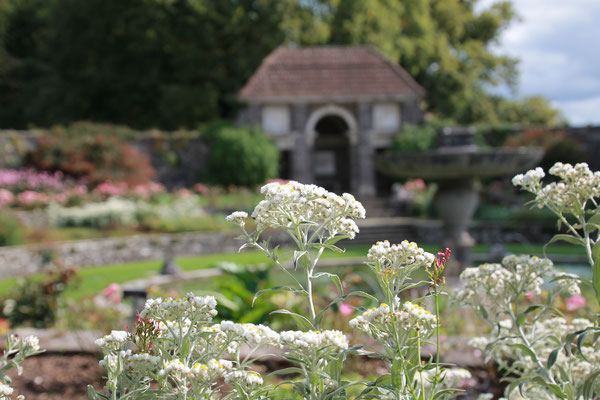 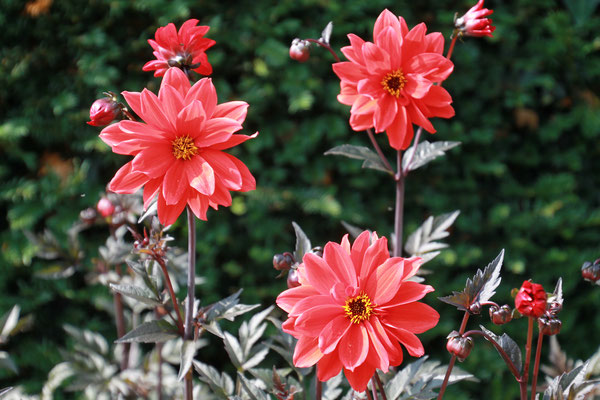 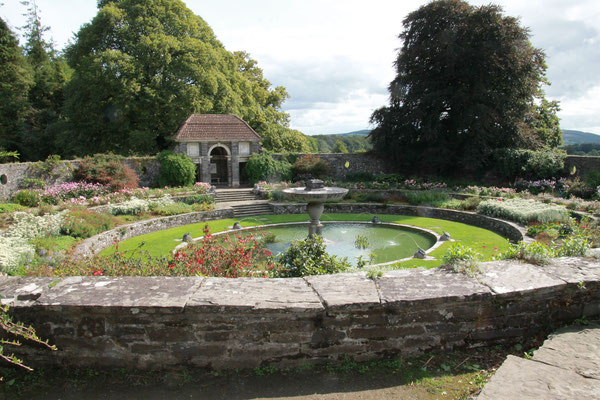 The formal gardens were funded much later by Colonel Sir William Hutchinson Poe, who married a Trench descendant, in the early years of the 20th century. To realise his vision of an Italian style garden which complimented the older parkland he spent more than €250,000, a lot of money for a garden now and a vast amount at the time.

The design is the work of well known garden designers Sir Edwin Lutyens and Gertrude Jekyll and Heywood is considered to be one of the finest of Lutyen gardens. 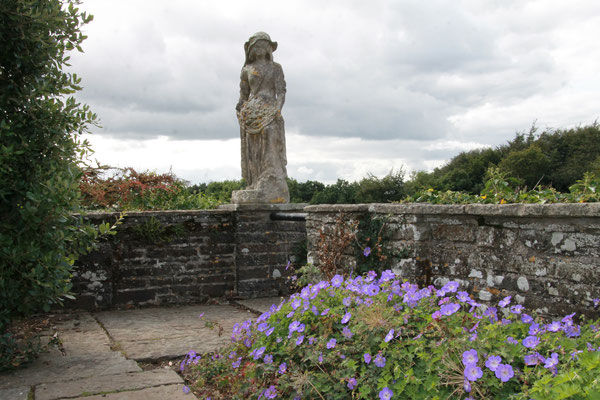 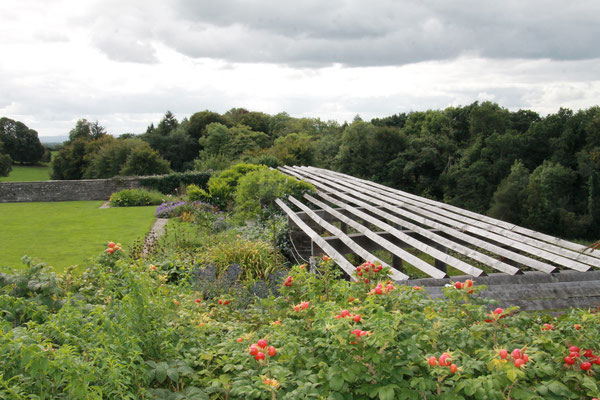 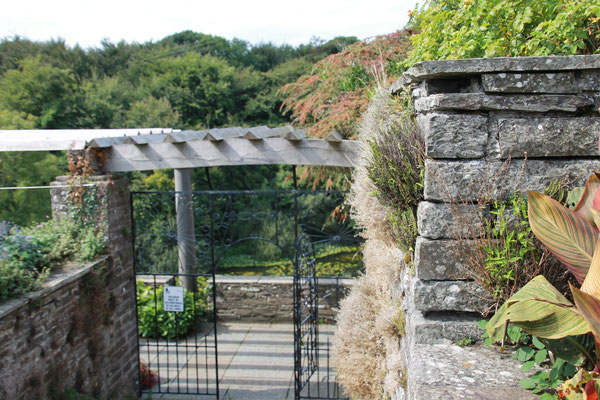 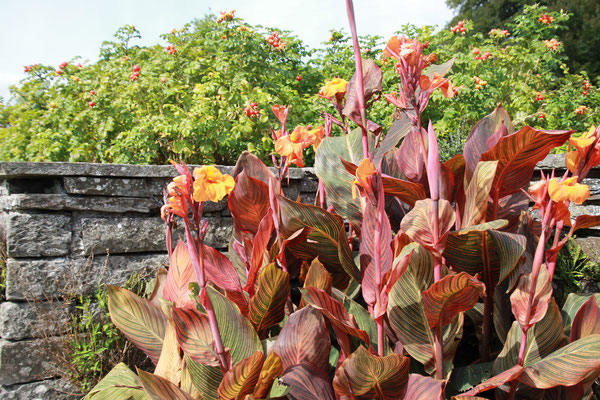 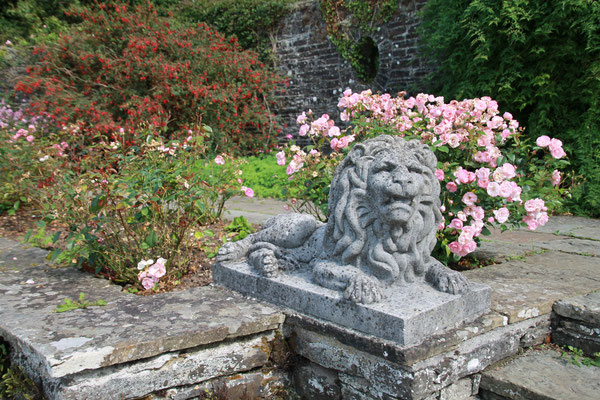 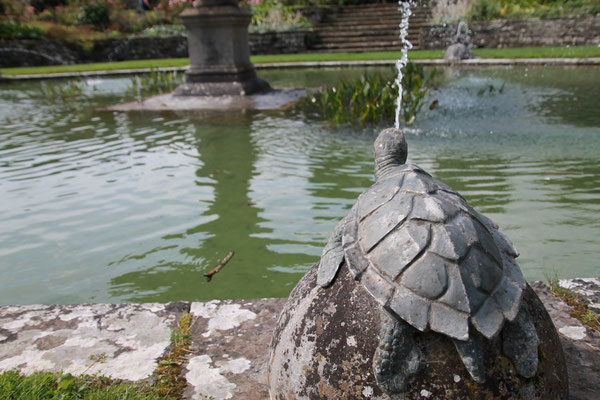 As the house has disappeared, it was located where the lawn sits, its up to ones imagination to appreciate what the view would have been like from the top windows. There is now a school building to one side of the garden, which on the one hand needs to be ignored to enjoy the gardens, whilst on the other the children who attend that school do so in the most picturesque setting. At one point all the children walked out of the school to sit on the lawn and have outdoor time, clearly enjoying their surrounds. 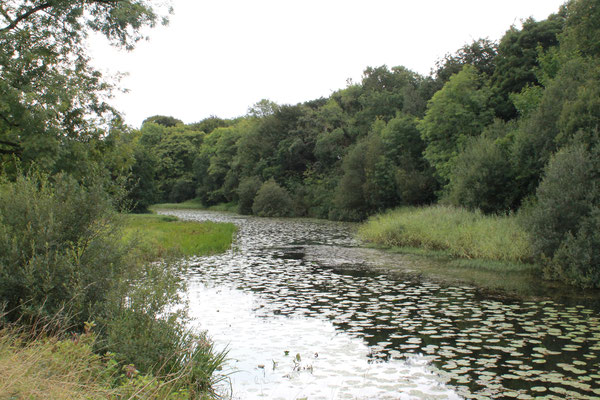 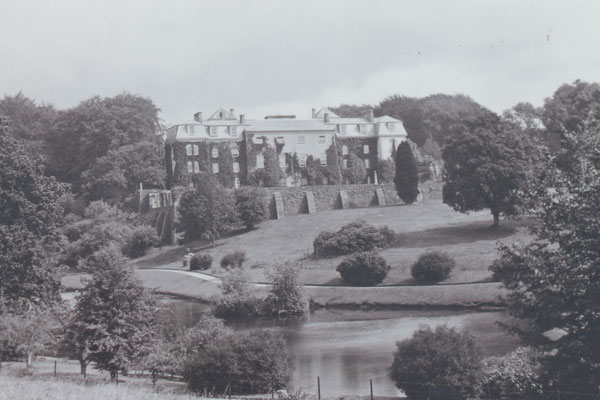 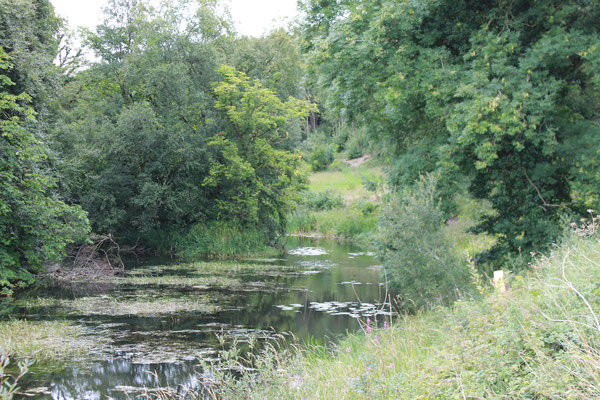 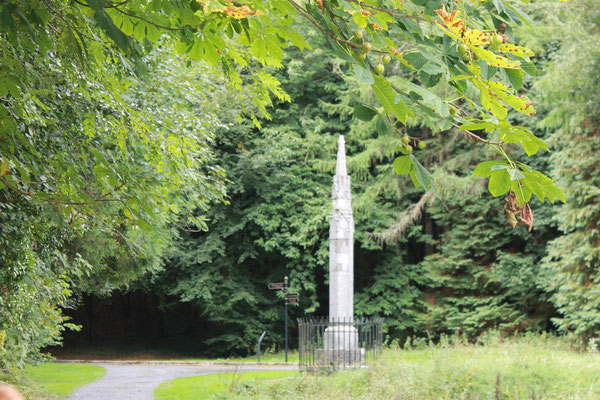 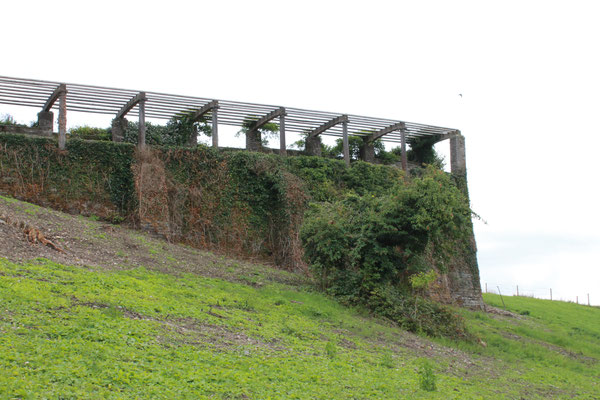 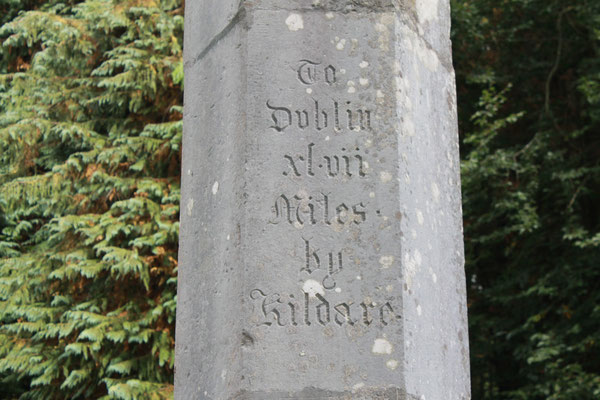 Heywood Gardens is now in the care of the state and is open year round. Entrance is free and tours can be arranged by prior appointment.

There are no toilets or other facilities on site and some parts of the garden are not wheelchair accessible. Allow about 45 minutes to an hour for a visit. We spent three hours there and it was a glorious sunny afternoon.

I highly recommend this garden as its one of the most beautiful that I have ever been in. Overlooked even by me, now I am overwhelmed by its beauty and devastated that I didn’t visit it sooner.